The Kings Of Atlantis will start dropping this Halloween with wave 1 at Cookies-N-Cream seen here! Wave 1 will consist of the Wealth King, War King, Sky King, Peace King and Wisdom King and the they will be cast in clear tints, painted in full renders, jade tints and one will even be a glow in the dark uber variant. Which one? Ha! Only the lucky buyer will know that! With each skull purchase there will be a blind boxed Talisman magnet too. Haven't seen the first half of the entire line up? Take a look below - 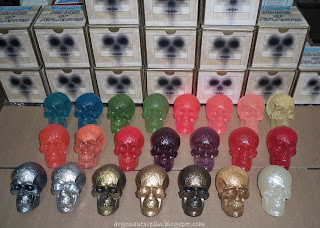 The Kings of Atlantis gold Wealth King was shown on televisions MTV Sucker Free Countdown with the Cookies-N-Cream crew interview (the Gold Tuttz resin cat got a cameo too!!!) 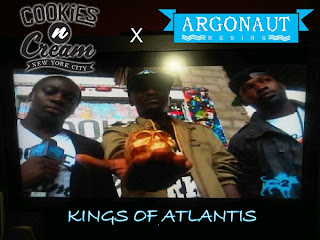 See the full MTV television interview here!
Posted by Argonautresins at 8:36 AM