Adventures In 3Dprinting Part 2 of 2!

Another reason I got back into 3Dmodeling and printing was not just to create figurines but to create better concept art as well. I'll touch more on that in a future post with some all new 2D images like the one below created with 3Dmodeling and Photoshop that will most likely turn into header cards, posters and prints. Maybe...

Part 2 of 2 Color and process! 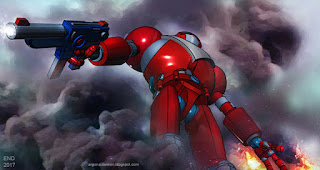 This is what the finished Dank robot soldier looks like all painted up on the 3dprinted resin parts tacked together. There were some last minute color changes on the model in minor areas to make certain sections pop a little better. Now the robot figure can be printed in any scale and I can make any new changes to enhance it if needed. Like I said before (in the previous post) once I solve the articulations it can then go from maquette statue to poseable toy concept.
Big huge thanks to artist Victor Durango for the paint assist on the project. 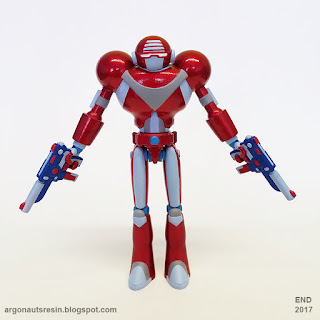 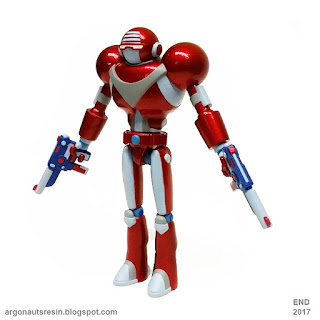 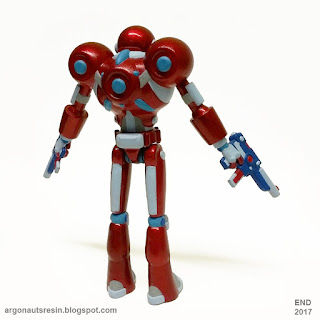 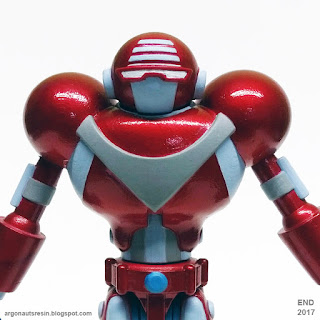 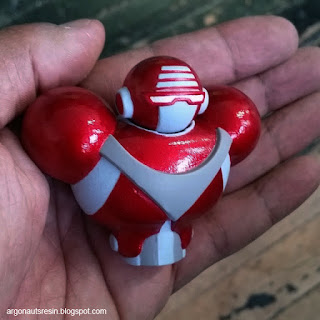 Here are some process shots of the robot design broken up and on the 3Dprinter que. The images also show the build sprues and flat rafts that attach the part to the print bed on the Moonray 3dprinter. The average print times for all the parts ranged from 4 to 8 hours give or take and there were no failures on the entire run. 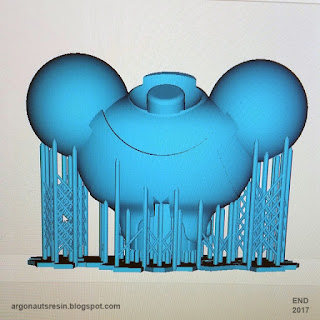 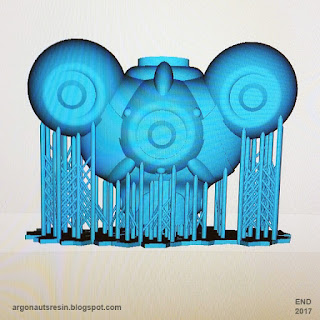 Printing upside down takes some getting used to as I was worried about big clunky solid parts falling off due to gravity. The good news is the raft the sprues are attached to are stuck to the print bed really good and takes a some effort to release it from the print bed with a metal spatula that comes with the printer. 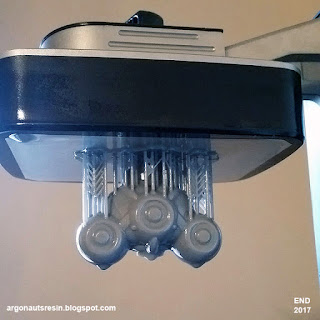 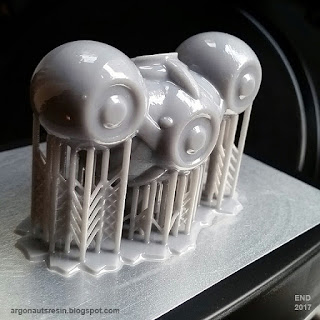 The excess resin is soaked and cleaned off with a old toothbrush in a 91% alcohol bath. I soaked the parts for 10 - 15 minutes, brushed them down and rinsed them off with clean water. All parts sat for a day to fully dry and they say you can put them in the sun for a few hours to cure them and harden them up more. You can also use all sorts of UV lighting to cure them further if needed. 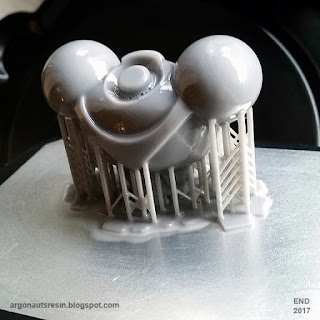 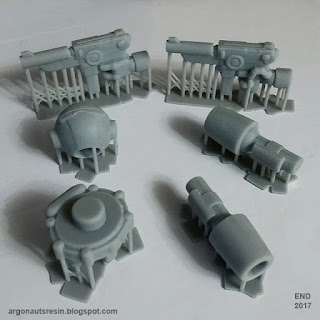 The gray resin was the best color to print this project in so I could see all the forms and details better. There were occasional build lines and divets or flaws on some areas where I removed the build sprues but overall the project came out pretty good. You have to double check sprue placement as they kind of ran into the fingers and over some detail on the bottom of the laser pistol. That was a royal pain trying to tool those areas and next time I'll orient the hand and gun in a different position. Lesson learned here. 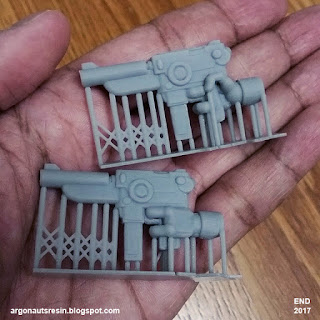 I probably should have made the legs one part or used square pegs to line them up better. Lesson learned here. 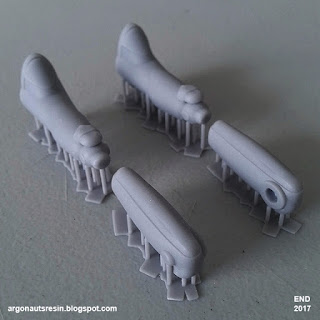 So the Moonray 3Dprinter from Sprintray did a great job on this Dank Robot Soldier project and now I have a better understanding of it after a decent learning curve. I do have several other projects in the works so stay tuned for more in the coming weeks. If you have any questions about this project or 3Dprinting in general you can email me and I do answer emails.
Posted by Argonautresins at 9:43 AM

Adventures In 3D Printing Part 1 of 2!

I've meaning to post up about my new adventures in 3d printing but got delayed by too many things of late these days.

Part 1 of 2 -
Bare with with me as I tell you about what I hope will be as interesting for you as it was for me.
It all started when I got heavily into researching affordable table top 3D printers and of the few that I liked I decided to go with a Moonray DLP printer from SprintRay. It was from a Kickstarter campaign and the price was right ($2,500 for a early bird pre-order - a grand less than the actual production model cost of $3,500) and the printed models looked like resin castings from my other in house projects. I was really impressed with the finished printed models I saw from the new Moonray 3Dprinter at a trade show at the Javits in New York City. Seeing the models live and in hand sealed the deal for me although there were a few other high end printers already on the market but I didn't like the finish on the models from them, some were very sharp but the cured material was not the over all look I wanted. The first two Moonray machines sent to me from the Kickstarter did not work properly and I had to send them back and that set me back a few months with shipping and repair time. Not only was the Kickstarter reward several months late but to send improperly working machines just made my setback time even worse. The good news is that the tech reps and the engineers got on the phone with me regularly until I was able to get a third machine from them (along with another free litre of resin of my choice for being patient about the frustrating process). I also had to purchase a brand new stronger computer to dedicate to the third working 3dprinter since my other computer was a older model not capable of running it. That was a ugly and extra costly surprise. So, after all the craziness, and several months behind schedule I get the latest printer cranking away and start running all sorts of tests and projects to see what it could do for me and what I had planned. I wound up printing a few hundred different pieces in different colored resins with occasional failures along the way. The reps for the Moonray 3dprinter were very good at getting back to me via emails to help solve any issue I had to keep me up and running. Most of the time it ran great and sometimes you had to chant religious verses to the 3dprinting Gods to get it back on track. As with all the 3dprinting endeavors with the machines there is a learning curve

Of all the 3dmodels I printed the most ambitious one is of a old robotic character I designed a few years after I got out of High School way back when. I always liked the concept which was very simple and it was inspired by professional NFL football players when they used to wear the thicker fuller shoulder pads and clunkier helmets in 70's and 80's. I kept most of the drawings I did of it from the early 90's and made some modifications on the 3D model I built in the computer. I totally changed the weapon since it didn't fit the style of the newer 3dmodel. The first version of the 3dprint will be a maquette and then as I get better at this I'll try and articulate it in as many areas as the design will allow. The goal here was to physically pull something out the computer as close to the digital design as possible and to produce it in any size/scale.

Below is the finished tooled up resin 3dprint, the old concept art drawings and the 3d full color computer model. 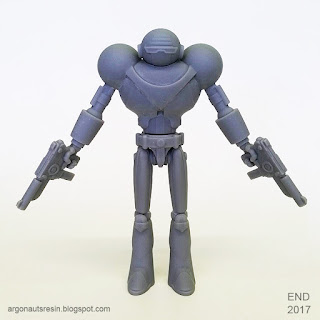 I went with a last minute double pistol change up to make the 3dprint cooler looking than the full color computer model. It also balances out the design a bit more as well. 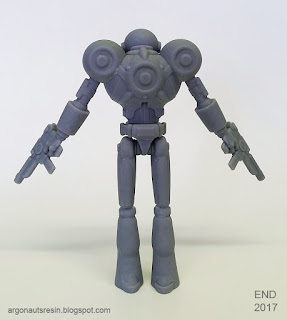 Nothing is glued together on the 3dprint at this time because it has to be primed and painted and it's just easier to do in multiple parts. 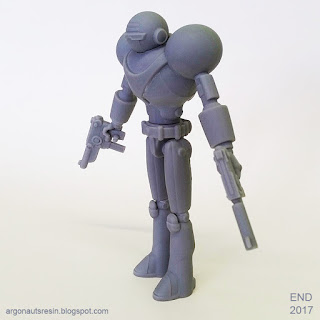 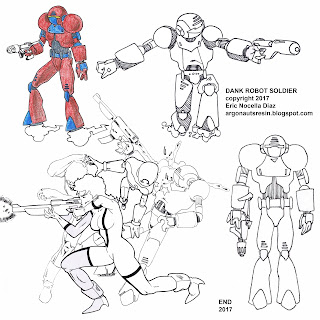 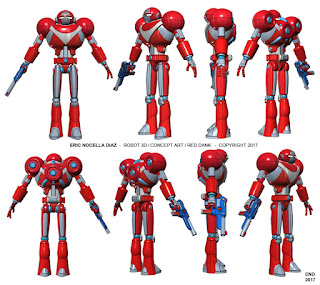 As you can see I made some changes on the 3dmodeled version because some of the 2D designs would not work in the real world. I couldn't find any artwork with the back view design so I had to model that uup from scratch. I also broke up the 3Dmodel for print almost as if I were preparing it for articulation even though this first version will be glued together for the painted maquette. I could have printed it all in one piece but the print time would have been way too long. I'm not a fan of long prints that take several hours and it's no fun at all to have a 12 hour print fail when it's almost done. That will make you nutty crazy, trust me on that. 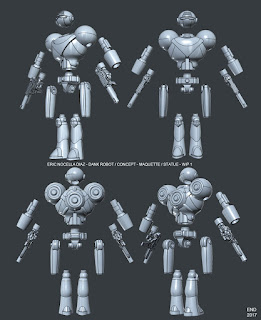 Up next:
The fully painted finished 3dprinted resin model and print prep images.

Posted by Argonautresins at 8:08 PM

The Sky King from the Kings Of Atlantis prototype sculpture is now complete and heading off to mold along with a few other projects I've have finished off. This King maquette sculpture will come his lightning bolt power sword and a skull deco base all sculpted up from scratch. The Kings are going to be the villains of the Tuttz cat universe in the story called The 6th Prince I have been working on for a while now and plan to start showing all the concept art from it soon. Everybody wants to know more about the Tuttz cat and where he came from and he has quite a story to tell. It was a blast making the body sculpt for the Kings Of Atlantis as I had dozens of castings of the head sculpture laying around for a few years and it was time to finally bring it all together. Below is the finished sculpture with a withered, aged, worn and cursed feel and I hope it will look thousands of years old after it's cast up and painted. The Sky King figure stands at 7 inches tall and will come with the lightning bolt power sword and cursed skull base accessories. 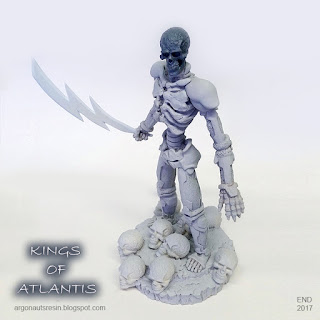 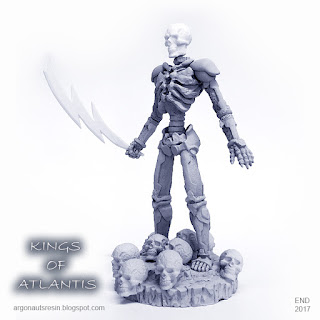 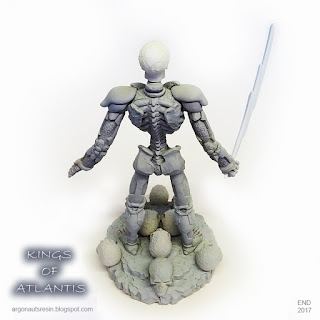 Here's the finished baked Super Sculpey images of the sculpture with a finished resin casting of the head.. 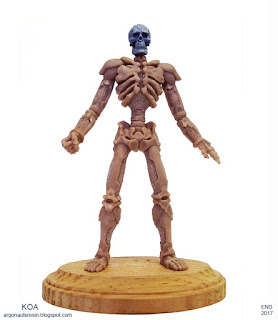 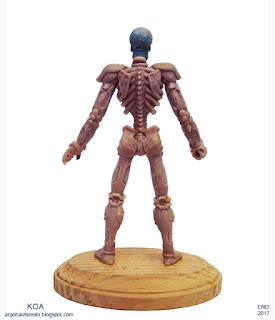 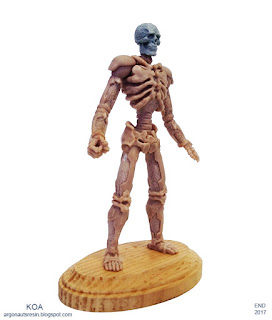 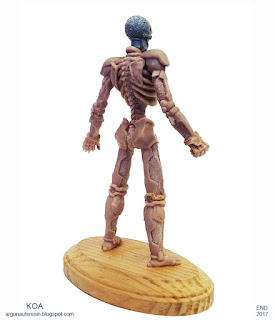 Posted by Argonautresins at 8:20 AM