My apologies for the lack of posts lately as things have been a tad hectic with the big New York Comic Con on it's way. I've also been trying to relocate the studio to a bigger space because I've run out of room with all the current projects in the works. The good news is my Tuttz character has crossed over with Onell Designs Glyos system. A good friend of mine (and uber toy guru) Rob Losito introduced me to master toy maker Matt Doughty at last years NYC con and suggested we work together on something Glyos related. I fell in love with the popular little articulated mix and match Glyos figures that Matt produced and wanted to get in on the action. Rob suggested the mini Tuttz would be a really cool crossover project and Matt was gracious enough to bless us on this endeavor and send over some Glyos parts to get the project under way. Seeing that this project was going to be a ton of work I brought in Victor Durango to help get the body styles right and do all the intricate paintwork. I also brought in The One Cam and When Giants Meet to do the dynamic and exciting photography. What you see below is just the tip of the iceberg on what we have planned for this Tuttz Glyos project called the Bad Luck Squadron so stay tuned! Tough black cats that get sent on the most dangerous missions and always come back! Bad luck for whomever runs into them...
The Leader... 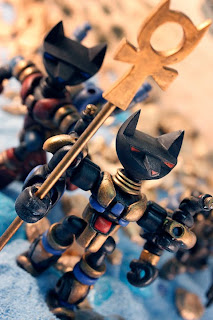 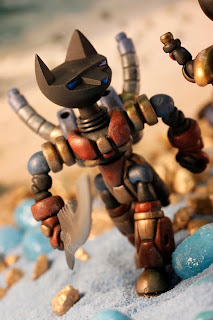 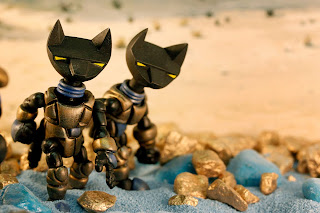 I will be at the New York Comic Con with all sorts of goodies and I will be posting updates on all of those upcoming projects soon. Tuttz Mini's Series 1 - 5 have all sold out! Thank you for you continual support and there are lots more exciting resin projects on the way...

Posted by Argonautresins at 6:40 AM